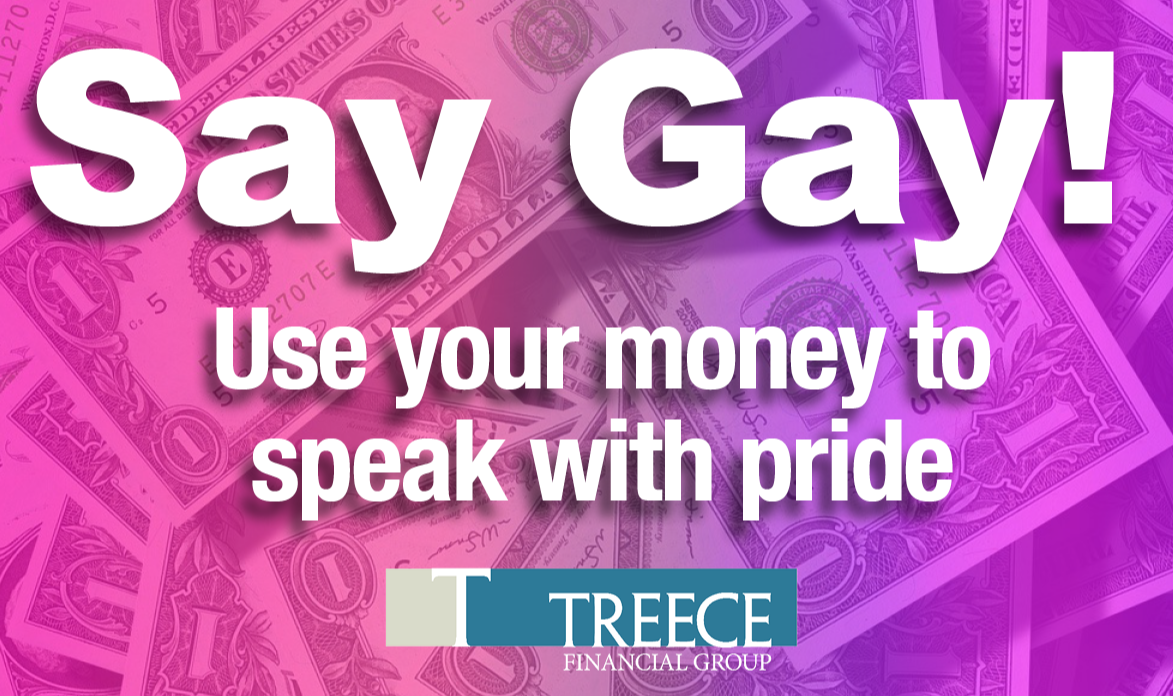 Say GAY! Give voice to your values with your money

I am gay, gay, gay, gay. Gay to the max. Gay infinity! And I am on fire. Many of my LGBTQ+ (as well as straight) clients are also enraged about Florida’s discriminatory "Parental Rights in Education" bill. The law is intended to promote bigotry and send a message that LGBTQ+ people are not OK.  It is shocking. It is wrong. And I am standing up to it.

I am an Investment Advisor and Accredited Investment Fiduciary who is licensed and working in the state of Florida. I am also a gay man who is outraged that my state’s leaders are once again demonizing the LGBTQ+ community to grandstand in the name of politics and to pander for votes.

I recently had a conversation with a straight client about the law and its effects, and they said, “Well, this is about kindergarten. This is about trying to just make sure that things are appropriate for all ages.” That is false. That is plausible deniability. This law was passed in order to invoke fear of the “other” for political gain. The governor's spokesperson, Christina Pushaw, even referred to this as an "anti-grooming" bill, raising the old, ugly, bigoted trope of gays as recruiting youngsters or even suggesting pedophilia. It's a throwback to the Anita Bryant days of "Save Our Children." Florida State Senator Ileana Garcia made despicable comments during the debate on this bill that being gay is "not forever," raising the ugly argument that being gay is something that can be "fixed."  If anyone has any doubt about the intent of this legislation, just look at the retaliation against Disney by the governor and the majority Republican legislators.  This is a furious attack on LGBTQ+ people and anyone or any company that is "woke" or supports equality for LGBTQ people.

Bigotry is on the rise in Florida

Sadly, this recent anti-LGBTQ+ law is just one example of how Florida’s legislators are attacking minority communities and threatening the freedom of every one of this state’s citizens. Immigrants are being attacked. The Anti-Woke Act attacks the African-American community.

I have had some people respond to my impassioned activism around these issues by saying things like, “you are being too sensitive”, or “oh, don’t separate people into groups”.

No, I am not being too sensitive. No, this is real.  It hurts when you are mistreated. It can affect your life in consequential ways.

Money talks—use yours to give voice to your values

One of the most effective ways to counteract these attacks on the rights of all minority communities: don't work with bigots. Seek out professionals who share your values and understand your needs—especially when the security of your financial future is at stake.

My mission as a financial advisor is to empower my LGBTQ+ clients to put their money where their values are. As a financial fiduciary, I have a legal duty to provide advice and service that is in the best interests of my clients. Reading between the lines, the fiduciary rule is really about the importance of honoring diversity and personal dignity.

I want you to have that same duty to yourself. Always ensure you are working with someone who is going to advocate for your best interests. Work with somebody who is well-versed with financial planning concerns and issues specific to the LGBTQ+ community. It doesn't have to be an LGBTQ+ person, but somebody who will advocate for you. Do your research and do not support people who agree with bills like “Don’t Say Gay” and “Anti-WOKE Act” or who support candidates who are diametrically opposed to your best interests.

Many financial advisors often say something like “I don't discriminate. I love everybody. I don't care if you’re African American, Jewish, or LGBT.” But, that is just not enough. There are unique financial planning issues related to a person’s identity and life experiences that need to be understood, respected, and factored into the financial planning discussion.

For example, marriage is still a relatively new concept to many same-sex couples, so educating couples about changes to tax filing status and how to maximize federal marriage benefits is important. One upsetting consequence of the Supreme Court leak about the possible overturning of Roe v. Wade is talk that the next target is same-sex marriage. The lead author of the leaked opinion, Samuel Alito, was a judge on the historic Obergefell decision that recognized a federal right to same-sex marriage as part of equal protection under the law under the 14th amendment, and it was Samuel Alito who wrote a scathing opinion against marriage equality in the minority opinion. To suggest that he would change his vote now to suddenly respect a shorter precedent than Roe v. Wade on an opinion he virulently opposed seems completely disingenuous. The mere discussion of taking marriage rights away from same-sex couples is insulting and degrading, yet some right-wing organizations have been openly gleeful at the prospects and have declared that this is a primary goal. If Roe v. Wade is indeed overturned, nobody can assume marriage equality for same-sex couples is safe. The possible loss of same-sex marriage benefits instantly becomes a serious financial planning issue.

Issues relating to pension payouts and Social Security’s divorce and survivor benefits also require careful consideration for many LGBTQ+ couples. A same-sex couple’s estate planning may also require additional thought in order to protect from hostile relatives and ensure the surviving partner receives what is deserved. Many LGBTQ+ older adults are aging alone, so concerns and fears about who will take care of them as they age—and how it will be paid for—need to be addressed in financial planning discussions. From finding ways to fund long-term care to finding inclusive caregiving and assisted living services, a financial advisor who understands these concerns is invaluable to your peace of mind.

For a financial advisor to do the best job possible, a foundation of honesty and a high comfort level needs to be developed between the client and advisor. How is this client going to be treated and respected? Are they going to be reticent to come out and talk about their family or their life situation? What if they're HIV positive? Personal discussions like this take a lot of trust. Working with an advisor who has had similar life experiences and knows the client’s concerns goes a long way in building that trusting relationship.

Financial planning is moving towards a more inclusive future

Unfortunately, the financial planning industry has a history of being conservative and unwelcoming to some. Out of the 352,000 personal financial advisors operating within the United States in 2019, 84.6% are white, 70.8% are male, and the average compensation for female advisors lagged behind their male counterparts by over $66,000 per year.

Fortunately, the financial planning industry is making strides to reflect the diversity of today’s investors. Major initiatives are underway to expand minority representation and gender equity within the field. I am happy to report that my broker-dealer, Cetera Advisors, is a leader in these diversity and inclusion efforts. I was proud to have served as an inaugural member of the Cetera Advisor Diversity & Inclusion Council. In the most recent Human Rights Campaign Foundation’s 2022 Corporate Equality Index, Cetera earned a top index score of 95 out of 100. There is still more work to do, but as businesses such as Cetera commit to making change, it can give us all hope for a brighter future.

We take pride in helping you secure your financial future!  Click here to schedule your personal and confidential consultation on a date and time that works best for you.

Video: David Treece on Florida's "Don't Say Gay" Bill: Use Your Money to Speak with Pride

Video: The Benefits of Working with an LGBTQ+ Financial Advisor﻿

Webinar: 5 Things Every LGBTQ+ Individual Should Do Right Now﻿