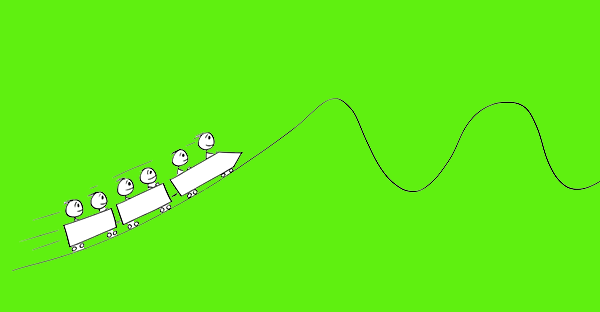 Inflation + Volatility = Will we be taken for a ride?

The talk about inflation is going to be really interesting to watch.

Tom Hudson, of the Miami Herald and WLRN's The Sunshine Economy, warned us to take heed back in January about the growing worries that inflation will erode the value of bond interest payments that have been creeping into the bond market this year — pushing down bond prices and pulling up the market interest rates.

"The bond market is a behemoth that can bully investors, regulators and politicians. The specter of fast-rising interest rates, and fast-falling bond prices, is intimidating for everything from household spending to government economic stimulus efforts." (Tom Hudson)

The Fed has been clear and communicative that they will remain patient even when inflation should layer up. Their target has been 2%, and we aren't there yet. Its pledge to keep the target interest rate low for a couple of years has sent the forward-looking markets running well ahead of stock's average earnings multiples. The many Fed reassurances — including low interest borrowing — has shown the stock market and bond investors signs of impending inflation.

Inflation is the enemy of bond investors.

The worst of inflation comes from recent massive government spending that's being injected into the economy.  With he most recent 1.9 trillion dollar stimulus passed and a possible infrastructure package in the works, it is hard to conjecture how we are going to pay for all of this. The great news is that the vaccination rollout is ramping up and when the economy safely opens — including the day restaurants and bars can have 100% of their seating available once we get more people vaccinated — the whole economy will open up to the world once again and unemployment will go down.

So, can all of this possibly be inflationary?

It's possible, but a lot of people have been predicting inflation for years and years and years, and we just haven't had it. But a lot of the normal economic measures that we've looked at really haven't been proven. The housing numbers have been really interesting, too, because there's basically a shortage of inventory across the country. A shortage of houses has been caused because of lower interest rates and pent up demand for a shrinking inventory. In the summer, we could see a lot more on construction and that's very good for the housing sectors, a pretty huge sector of the economy, including manufacturing related to housing. It all could be very positive — as long as inflation doesn't keep hampering supply costs.

"Inflation may be transitory, but it's going to be a doozy and Fed Chief Jay Powell is going to have to steel his heart when this quarter's price elevation is exposed. With rates one again going up today we have to bet that it might be too difficult for him NOT to raise rates now that the Great Reopening is upon us."

Federal Reserve Chairman, Jerome Powell, was speaking at a conference earlier this month and he predicted strong job growth and increases in consumer prices as the vaccine rollout allows the economy to reopen fully. But he cautioned that he doesn't think the Fed is overheating. If the Fed thinks that, theoretically, they will raise interest rates. And that's not predicted, they've said that they're not going to do that even in the face of rising inflation. So it all remains to be seen.

Rolling along with the rising yield curve

All of the bond yields have been so low, so a lot of money has been being plowed into the market to try to get some sort of return. In the short run, that can actually cause the stock market to decline. We're getting back to normal, because we're seeing a steepening of the yield curve, where the long term interest rates are going up higher. The worst thing that we always fear is a sign of a recession is if you have an inverted yield curve, or a flattening yield curve,

We have a rising yield curve now; therefore long term investing is looking more favorable. That is why some believe this is a good sign that we are getting back to normal. Stock market volatility is normal and it's to be expected. It's predictable. And yet, we think that this is all very healthy in the long run.

Overall, we think the economy is making good progress. We are not worried about the volatility. An investor always wants to make sure they're within their risk tolerance. The forecast is still for growth. The earnings for companies have been overall positive - showing a recovering economy.

When we plan our clients' portfolios — particularly for retirees — we plan a lot of risk control with money managers who will reduce the risk and will go to cash, products that have guarantees, or maybe a more moderate program to get started.

There are a lot of reasons for optimism through the summer. In the meantime, it shouldn't surprise us if there's a lot of volatility. The economists we are following — including the money managers we're working with — are optimistic. We're getting through the worst of this, and the government has come through the last year between all the fiscal stimulus and the monetary policy.

If you would like advice on your portfolio, please don't hesitate to reach out to our office at 305-751-8855 or via email. We look forward to addressing your concerns.